AUSTRALIA FROM SURVEYS MADE BY ORDER OF THE BRITISH GOVERNMENT COMBINED WITH THOSE OF D'ENTRECASTEAUX, BAUDIN, FREYCINET, &c, &c BY JOHN ARROWSMITH. 1850.
London, Pubd. 1st Jany. 1850, by John Arrowsmith, 10 Soho Sq.

In the 1840/1 state of the map Victoria is inserted on the Coburg Peninsula. Coburg Peninsula is shortened to Coburg Pa.
State 1840/3 shows the results of John Clements Wickham's discoveries on the north coast, of the Adelaide R. (3 line note) and the Victoria River (6 line note. Disc. By Wickham Aug 1839). New place names on the Adelaide R. are Mt. Welcome and on the Victoria R. and coast Treachery B., Keys Inlet, Quoin I., Queen's Channel, Victoria R., Endeavour Hill, McAdams Range, Sea Range, Sand I., Whirlwind Plains, Beagle Valley and Fitzroy Range. On the west coast Exmouth Gulf is now shown with an open head and the note Bottom indistinctly seen has been removed and an Island has been shown near the head opposite a Hill on the east coast.

In the 1846/1 state of the map the new colony of NORTH AUSTRALIA appears above 26°S.

In the 1847/1 state of the map the final part of Ludwig Leichhardt's expedition track is shown in Arnhem Land from southern Queensland to Port Essington and around the west coast of the Gulf of Carpentaria with many rivers named.

In the 1840/3 state of the map George Grey set out once more in February 1839 to explore the coast from Shark Bay southwards. On the west coast opposite Geographe Channel, appears Kelaina Pt and below this Lyell Range and the Gascoyne R. shown flowing into Shark Bay. Mangrove flats shown south of the Gascoyne. Long Pt. appears on the mainland opposite Faure Is.
Further south the Murchison R. appears and behind it a range is shown. The following places have been added Victoria Ra., Hutt River, Bowes R., Chapman R., Port Grey, Greenough R., M. Hill, Irwin R., Water Pk., Mt. Horner, Arrowsmith River, Herschel Ra., Gairdner Ra., Hills R. and Smith's Grave (Frederick Smith, a member of George Grey's 1839 expedition to the Gascoyne area).(Cannon, Michael, 1987 pp. 188-189)

In the 1841/1 state of the map a long note added to the south coast at the Head of the Great Australian Bight re [Edward John] Eyre reaching this location in December 1840.

In the 1842/1 state of the map the Houtman Abrolhos Islands off the west coast have been redrawn and the individual island and passage names appear, i.e. North Is., Wallabi Is., Middle Passage, Easter Island, Zeewyk Passage. The Pelsaert Group named and South I. and Batavia Rd. named. South of these is Turtle Dove. (Hordern, Marsden 1989, pp 212-219 passim)
On the opposite mainland coast Port Grey repositioned further north. Mt. Fairfax name repositioned.

In the 1846/1 state of the map the Colony of NORTH AUSTRALIA appears.

In the 1847/1 state of the map the north-west coastline has been redrawn and new place names and notes on the nature of the country appear. This was as a result of the work of Wickham and Stokes; Pt. Blaze, Solitary I., Cape Missiessy. The note on the north-west coastline, which was on the original West 1838/1 state between 117°E and 121°30'E., which referred to the French has been removed. It read: This part of the coast from Forestier Island to C. LatoucheFreville was only seen by the French Expedition at a distance, it appeared to be low and sandy and fronted by extensive Shoals.
In the 1850/1(1848/1) state of the map more hill features appear behind the newly redrawn north-west coast coastline between 117°-120°E. Also in this area west of Forestier's Island a coastal note on mud flats appears.
New coastal names appearing on the west coast at about 29°S are Champion Bay, Moresby Ra., Mt. Victoria & Albert, Buller River. The following names have been repositioned Hutt R., Greenough R. & M. Fairfax, and the note on Sandy patch moved from north to south of R. Arrowsmith. The following names have been removed: Mt. Naturaliste, Victoria Ra., Menai Hd., Table Hill, note on Flat Top Hill, Herschel Ra. and Mt. Horner. Compare with previous state i.e. West 1847/1.
Explorations by A. C. Gregory in 1846 are now shown east of Perth, then north to 28°30'S and west towards the coast at Arrowsmith River, then southwards back to Perth (28°30'- 29°30'S / 114°15'-114°30'E.). The exploration route is incorrectly shown passing down the Arrowsmith River rather than the Irwin River, where Gregory discovered coal.
A further November 1848 exploration by A. C. Gregory is shown north of Perth following an inland route parallel to the coast to the Murchison River and back to Perth which suggests that this state was not published before mid 1849. However ms. Sources suggest that Arrowsmith did not obtain this information until some time in 1850. See 1850/1(1848/1)

National Archives (UK)
MPG 1 /696 6. Map of explorations in Western Australia to find a post road from Bunbury to Kojonup. Scale 1inch to 2½ miles. By A. C. Gregory, Assistant Surveyor. 1847. 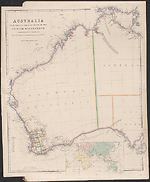