AUSTRALIA FROM SURVEYS MADE BY ORDER OF THE BRITISH GOVERNMENT COMBINED WITH THOSE OF D'ENTRECASTEAUX, BAUDIN, FREYCINET, &c, &c BY JOHN ARROWSMITH. 1842
London, Pubd. 1st May 1842, by John Arrowsmith, 10 Soho Sq.

The boundary between New South Wales and Western Australia shown at 129°E. The territorial limits of the Colony of Western Australia first formally defined by Letters patent dated 4th March 1831. Prior to that date the western boundary of New South Wales was by Letters patent of 6th July 1825, proclaimed at Sydney 20th Dec. 1825 extended to 129°E).
The western boundary of South Australia is shown at 132°E declared on 28th December 1836. (McLelland, M. H. 1971, p. 672-3, 677)

The first 1838 issue of the map is notable for its blank interior. Almost all the information is coastal in nature except for the south-west corner of the continent.
In the 1839/1(1838/2) state of the map the name WESTERN AUSTRALIA has been added to the map. Fifteen counties are named and delimited on the map with the exception of Kent which lacks northern and eastern limits.
Also in this state of the map new names appear from Lieut. Lort Stokes survey in King Sound. He has renamed the Sound in honour of Phillip Parker King who had previously named it Cygnet Bay. The following names appear; Beagle Bay, King Sound, Roe's I., Hope Inlet, Disaster B. Valentine I., Fitzroy R., Mary I., Pt. Torment, Stokes Bay and Port Usborne. (Hordern, Marsden 1989, p.62, 63 map, 72 and 82 and loose map)
Names appear following George Grey's expedition to Hanover Sound (Dec.1837) accompanied by five men one of whom was his close friend Lt. Franklin Lushington. The course of the Glenelg River appears and also shown are Lushington's farthest and Lt. Grey's farthest. (Cannon, Michael 1987, p. 186)
In the 1840/1 state of the map the number of counties has been increased to 26 names which are now numbered and listed separately in a table. This state shows the increase in knowledge of the area east and south of Perth. An explorer's track is shown east of Perth to Lake Brown and then west to the Moore River. The northern boundary of Twiss County has been adjusted southwards.
Moving down the west coast on the land opposite Jurien Bay a note appears Three rocky hillocks on the ridge.
In the west Kimberley area in King Sound the following names have been added from Lort Stokes work on this coast in the Beagle during 1838; Cone Bay, Saddle Hill and Compass Hill on the eastern shoreline. Stephen Ra is inserted across the mouth of the Glenelg R. In the area where the Fitzroy R. debouches into King Sd. is found the comment Thick forest, trees large, further east at Collier Bay two comments have been removed from the hinterland of Collier Bay. The names Doubtful Bay inserted above Collier Bay and Slate Is. (nr. Camden Sound). (Hordern, Marsden 1989, p.62, 63 map, 72 and 82 and loose map)
New developments are shown as far east as almost 119°E.
State 1840/3 shows the results of John Clements Wickham's discoveries on the north coast, of the Adelaide R. (3 line note) and the Victoria River (6 line note. Disc. By Wickham Aug 1839). New place names on the Adelaide R. are Mt. Welcome and on the Victoria R. and coast Treachery B., Keys Inlet, Quoin I., Queen's Channel, Victoria R., Endeavour Hill, McAdams Range, Sea Range, Sand I., Whirlwind Plains, Beagle Valley and Fitzroy Range. On the west coast Exmouth Gulf is now shown with an open head and the note Bottom indistinctly seen has been removed and an Island has been shown near the head opposite a Hill on the east coast.

In the 1840/3 state of the map George Grey set out once more in February 1839 to explore the coast from Shark Bay southwards. On the west coast opposite Geographe Channel, appears Kelaina Pt and below this Lyell Range and the Gascoyne R. shown flowing into Shark Bay. Mangrove flats shown south of the Gascoyne. Long Pt. appears on the mainland opposite Faure Is.
Further south the Murchison R. appears and behind it a range is shown. The following places have been added Victoria Ra., Hutt River, Bowes R., Chapman R., Port Grey, Greenough R., M. Hill, Irwin R., Water Pk., Mt. Horner, Arrowsmith River, Herschel Ra., Gairdner Ra., Hills R. and Smith's Grave (Frederick Smith, a member of George Grey's 1839 expedition to the Gascoyne area).(Cannon, Michael, 1987 pp. 188-189)
In the 1841/1 state of the map a long note added to the south coast at the Head of the Great Australian Bight re [Edward John] Eyre reaching this location in December 1840.

In the 1842/1 state of the map the Houtman Abrolhos Islands off the west coast have been redrawn and the individual island and passage names appear, i.e. North Is., Wallabi Is., Middle Passage, Easter Island, Zeewyk Passage. The Pelsaert Group named and South I. and Batavia Rd. named. South of these is Turtle Dove. This charting of the Abrolhos was performed by Wickham and Stokes from April 1st until May 23rd. 1840 (Hordern, Marsden 1989, pp 212-219 passim)
On the opposite mainland coast Port Grey repositioned further north. Mt. Fairfax name repositioned.

In this state the Houtman Abrolhos Islands off the west coast have been redrawn and the individual island and passage names appear from the work of Wickham and Stokes in the Beagle in April-May 1840 i.e. North Is., Wallabi Is., Middle Passage, Easter Island, Zeewyk Passage. The Pelsaert Group named and South I. and Batavia Rd. named. South of these is Turtle Dove.
On the opposite mainland coast Port Grey repositioned further north. Mt. Fairfax name repositioned. 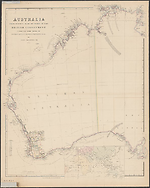