AUSTRALIA FROM SURVEYS MADE BY ORDER OF THE BRITISH GOVERNMENT COMBINED WITH THOSE OF D'ENTRECASTEAUX, BAUDIN, FREYCINET, &c, &c BY JOHN ARROWSMITH. 1846
London, Pubd. 1st May 1846, by John Arrowsmith, 10 Soho Sq.

In the 1840/3 state of the map George Grey set out once more in February 1839 to explore the coast from Shark Bay southwards. On the west coast opposite Geographe Channel, appears Kelaina Pt and below this Lyell Range and the Gascoyne R. shown flowing into Shark Bay. Mangrove flats shown south of the Gascoyne. Long Pt. appears on the mainland opposite Faure Is.
Further south the Murchison R. appears and behind it a range is shown. The following places have been added Victoria Ra., Hutt River, Bowes R., Chapman R., Port Grey, Greenough R., M. Hill, Irwin R., Water Pk., Mt. Horner, Arrowsmith River, Herschel Ra., Gairdner Ra., Hills R. and Smith's Grave (Frederick Smith, a member of George Grey's 1839 expedition to the Gascoyne area).(Cannon, Michael, 1987 pp. 188-189)

In the 1841/1 state of the map a long note added to the south coast at the Head of the Great Australian Bight re [Edward John] Eyre reaching this location in December 1840.

In the 1842/1 state of the map the Houtman Abrolhos Islands off the west coast have been redrawn and the individual island and passage names appear, i.e. North Is., Wallabi Is., Middle Passage, Easter Island, Zeewyk Passage. The Pelsaert Group named and South I. and Batavia Rd. named. South of these is Turtle Dove. (Hordern, Marsden 1989, pp 212-219 passim)
On the opposite mainland coast Port Grey repositioned further north. Mt. Fairfax name repositioned.

In the 1846/1 state of the map the Colony of NORTH AUSTRALIA appears.

The date in the title has been changed to 1846.

The new colony of NORTH AUSTRALIA appears above 26°S.
The Colony of North Australia is described in the Australian Constitutions Act, 1842, s. 51 as "all those parts of the territories now comprised within the … colony [of New South Wales] as lie to the northward of the 26th degree of south latitude therein."
This leaves a narrow strip of land three degrees of longitude wide between South Australia and Western Australia which ostensibly belongs to New South Wales. In this state Arrowsmith has shown this as part of North Australia. 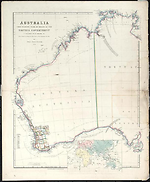