The overlap of east and west sheets occurs from longitude E130°- E137°. The joining line for the two sheets is E134°. Information in the area E134° to E137° is not updated on the east sheet indicating that the cartographer had designed the map in two sheets to be joined.

The position of the map imprint remains beneath the lower neat line, centre and right. The words 'Published by' have been omitted from the imprint. No date of publication is given.

Two linear scales for nautical and statute miles are shown

The copy being described is in an atlas acquired 24th September 1887 by the State Library of Victoria.

In the 1887/1 issue a new undefined area name URANEA is shown on the Tropic of Capricorn.
At 23°S/137°E and 138°E the Tarlton Range and the Cairns Range appear.

In Queensland the 1887/1 issue shows further exploration of the upper reaches of the rivers Gregory, Leichhardt, (the McIntyre, Nora and Hurley creeks), Herbert, Gilbert, Norman and Flinders with new tributaries shown . Two large tributaries of the Herbert are shown, the Hay R. and the Field R almost on the NT/QLD border.
Railway development is closely related to the discovery and development of mineral fields. This state shows the extension of lines first appearing in the 1884/1 state e.g. Brisbane to Mitchell line extended to Morven (1/1887).
A short line from Brisbane to Esk (8/1886) and another from Gympie (6/1889) due north via Maryborough (6/1881) to Howard appear. On the coast a line goes inland from Burnett to Mt. Perry (5/1884).
From Rockhampton inland this rail line extended from Emerald shown in 1884 issue to Barcaldine Downs (1/1886).
A very short line from Mackay on the coast alongside the Pioneer River to Hamilton (5/1886) appears on the coast.
Further north lines from Townsville go inland to Cape River Gold Field and Mt Remarkable with a branch line to Ravenswood.

In the 1887/1 issue the NSW railway development is similar with lines being extended further inland. The Sydney-Bathurst-Orange line extended to Bourke (8/1885) on the Darling River. A short line on the coast appears between Sydney and Kiama.
A branch line from the Sydney Bathurst line goes north-east to Cudgegong.
A branch line from 'Orange' to Molong is shown (12/1885) The Sydney to Newcastle line reaches Hexham where it is joined by a line from Newcastle. The line from Newcastle now linked via Maitland and Singleton to Narrabri.
A line going south from Sydney now reaches Hay on the Murrumbidgee with a branch from Goulburn to Cooma.
Albury-Morven-Guys Station line removed. A branch line from Narrandera to Jerilderie appears.

In the 1887/1 issue the Melbourne -Albury rail line branch to Everton extended to Myrtleford (12/1883). Benalla is linked to St James (1883) and Shepparton to Numurka appears (1881) and a branch line from Seymour to Yea appears.
In the south-east the line from Melbourne to Sale has a branch from Trafalgar to Maffra.
To the west of Melbourne a new line under construction from Melbourne to Ballarat has reached the Little River area. [Sunshine] to [Bacchus Marsh] (2/1887). There is a gap between Gordon and Little River [Parwan] (4/1886)
The Melbourne-Castlemaine-Sandhurst (Bendigo)-Mitiamo line is extended to Kerang (10/1884). The Melbourne-Castlemaine-Bendigo-Korong Vale line is extended from Charlton to Wycheproof (10/1883).
In the south-west the line from Dimboola extended across the Vic/South Australia border (1/1887).

In the 1887/1 issue at the Queensland /South Australia junction 26°S/138°E a string of lakes running north-west to south-east are shown as L. Thomas, L. Poeppel, L. Florence, L. Dobbie and Goyder Lake.
Eyre Peninsula replaces EYRE LAND (an Arrowsmith hangover) which was removed from the 1884 state.
The pastoral districts are now shown. See above.
Railways now link Adelaide across the River Murray at Murray Bridge and south-east to Bordertown, Tatiara and across the border to Victoria.

The title appears top centre outside the neat line.

The position of the map imprint remains beneath the lower neat line, centre and right. The words 'Published by' have been omitted from the imprint. No date of publication is given. 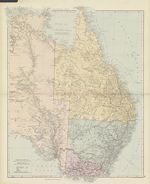 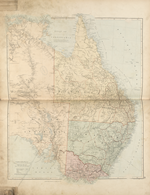