South Australia extends from 26°S to the south coast and from 132°E to 141°E. No boundary is shown between New South Wales and North Australia, which lies to the north of 26°S and east of 132°E.

See East sheet, 1838/1 imprint. The long note covering the eastern portion of Australia stating that Cook discovered this coast in 1770 has been removed.

The Colony of North Australia was erected by letters patent dated 17th February 1846 into a separate colony as follows: "all those parts of the territories now comprised within the … colony [of New South Wales], as lie northward of the 26th degree of south latitude therein".(McLelland, M.H. 1971)

In the 1838/2 state of the map Victoria appeared on the Coburg Peninsula. Coburg Peninsula changed to Coburg Pa (132°E)
In the 1842/2 state of the map the Albert and Flinders Rivers, the Plains of Promise and Disaster Inlet are shown at the head of the Gulf of Carpentaria. These discoveries and namings resulted from the explorations of Captain Lort Stokes in the Beagle's boats during July and August of 1841 (Perry, T.M. 1982, p.97, plate 53)

The 1838/1 state of the map shows the principal river systems of the Murray, Murrumbidgee, Lachlan and the Darling, Bogan, Macquarie, Namoi, Gwydir, Dumaresq and Condamine. There are notes on Mitchell's furthest north and south on the Darling 1832, Sturt and Hume's farthest north on the Darling, March 1829, and Oxley's furthest west on the Lachlan 1817. Sturt's Depot is shown on the Murrumbidgee from whence he descended the Murrumbidgee and Murray Rivers to the sea in 36 days and returned in 40 days. Dixon's furthest west 1833 (just west of the Bogan R.) and the spot where Richard Cunningham was killed (just west of the Bogan R.) also marked.
In the 1841/1 state of the map the NEW ENGLAND region appears. Rivers flowing to the coast in this region are the Richmond R. (previous dotted line of river removed), the Evans R. the Clarence R. System, the Numbucka R. and McLeay R. The R. Severn flows to the west of the dividing range. Ben Lomond and Mt. Mitchell appear to the east of the dividing range.
In the 1846/1 state of the map the name NEW SOUTH WALES has been repositioned in two parts horizontally over the south-east portion of the map. The NEW SOUTH appears between 28°--30°S, while the word WALES appears just below 32°S.

In the 1840/1(1838/4) state of the map the most notable change is the extensive updating of information in South Australia following the explorations of Edward John Eyre in 1839 and 1840. Three regions have been distinguished; BONNY LAND is the region adjacent to the current Victorian border (E 141°) STURT LAND occupies the Fleurieu Peninsula and north to the Gouger Range, EYRE LAND occupies the currently named Eyre Peninsula.
North of Mt. Arden at the head of Spencer Gulf the Flinders Range appears trending NE/SW. Mt. Eyre is marked to the immediate west of this range. Mt. Arden is shown at the southern end. Lake Torrens appears to the west with a note above it Extensive pl. of sandy soil destitute of vegetation with sandy ridges. At the southern end of the Flinders Range a Depot is marked on a hatched track labelled Overseers tract to the E. This track extends to the west to the coast at Streaky Bay where another Depot is shown and then continues along the coast to Pt. Bell.
North-east of Gulf of St. Vincent the Gouger Ra., Mt. Pullen, Mt. Bryan, Slate Hill and Hawdon Plains appear while south of these the Rocky and Bernard ranges and further south again the Barossa Ra.
In the Fleurieu Peninsula the rivers Broughton, Hill, Light, Gawler, Torrens and Finnis are shown.
Coastal names appearing for the first time in the 1840/1(1838/4) state on the Gulf of St Vincent are Port Gawler, Hurtle Vale, Onkaparinga B. The Field R. has been removed.
On the Eyre Peninsula topographical features and notes on the nature of the land and vegetation also appear such as low and scrubby swamp, spring, lagoon, very dense scrub and land rises with intervals of open plain among the scrub. In the north of the peninsula Mt. Start and the Gawler Ra trending north-west / south-east and then east with numerous parallel ranges. A track from Pt. Lincoln in the south-east of the Eyre Peninsula follows the coastline north-west. New names along this coast are Mt. Dutton, Mt. Hope, Wedge Hill, Mt. Cooper and Mt. Hall.
On Encounter Bay Victor Harbour is marked.
In the 1841/1 state of the map the results of Edward John Eyre's expeditions [1839-1840] include a postulated double horseshoe shaped salt water Lake Torrens (dry) as the most notable additional feature. New place names occur north of the Flinders Range, i.e. Termination Hill, Mt. Scott, Mt. Deception, Mt. Serle, Mt. Hopeless. Also notes such as Water very salt, Barren Plains covd. By Salsolae, Brine springs, Eyre's furthest n. w. 1840 and Eyre's furthest n. e. 1840 are shown.
In the 1841/2 state of the map Arrowsmith's modus operandi is demonstrated. He firstly inserts hydrology and then topography in a later issue of the map. In the second state topography has been inserted within the horseshoe shaped Lake Torrens with 'hairy caterpillar' type hachuring and in New England and Gippsland. Compare with East sheet, 1841/1 state.
In the 1842/2 state the shape of L. Alexandrina has been changed. L. Albert, Malcolm and the Coorong appear on the south coast.

The date in the imprint is changed to 1st May 1846

The colony NORTH AUSTRALIA appears north of 26°S and east of 132°E. No boundary is shown with New South Wales.
The long note covering the eastern portion of Australia stating that Cook discovered this coast in 1770 has been removed.
The name NEW SOUTH WALES has been repositioned in two parts horizontally over the south-east portion of the map. The NEW SOUTH appears between 28°--30°S, while the word WALES appears just below 32°S. 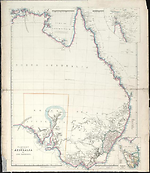