There are now two imprints centre lower margin the second of which has been changed to read:
London, Published Feby 18th 1839, by John Arrowsmith, 35 Essex Street and under this Ordered by the House of Lords to be Printed, 13th May 1839.

The title appears in the top right-hand corner outside the neat-line: Third Annual Report of the South Australia Colonization Commissioners

This state of the map is not noted in Ferguson

The map appears first as a normal Arrowsmith publication with the imprint shown as from his premises in 35 Essex Street.. The map is a cadastral plan of the area immediately surrounding Adelaide and covers an area from Port Adelaide in the north down to present day Brighton in the south (5 km beyond Glenelg which is shown on this map).

In Adelaide the map shows the roads, canals, schools, store, barracks, cemetery and hospital. Also shows surveyed sections numbered and available for sale in two sizes, small lots of 80 acres and large lots of 134 acres. Those sold are coloured and carry the landholders' names. The numbering system of surveyed lots is by two parallel sequences of numbers not immediately apparent unless the accompanying list of purchasers is available. Trigonometrical survey stations are marked.
There is an indication to prospective buyers of areas where the streams dry up in summer. The relief is shown by hachures and hill shading and vegetation is indicated.
Tributaries of the River Torrens are shown.

The 1839/2 state is the first indication that the map has been published officially.

In the 1839/4 issue a Hansard printer statement appears.

In this Lords issue the printer statement is lacking

The second imprint following Arrowsmith's imprint reads, Ordered by the House of Lords to be Printed 13th May 1839.

The printer statement has been removed.

There is no paper number on the map

This exemplar has only been seen in a House of Lords publication:

Great Britain. Parliament. House of Lords.
The Sessional Papers printed by order of the House of Lords, or presented by Royal Command in the Session 1837-38, … arranged in 51 v. List of Bills, Reports, Estimates, Accounts and Papers, Session 1837-38. v. 2. 1838. Third annual report of the Colonization Commissioners for South Australia to Her Majesty's Principal Secretary for the Colonies 1838. Ordered to be printed 13 May 1839. 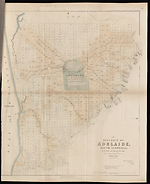