This chart is combined on one sheet with the Cockburn Sound chart being the lower chart of the two. From its title it can be assumed that the missing imprint must have been some time in 1833, probably May 31st, as Arrowsmith was for the most part in the habit of leaving unchanged the day and month in his imprints and altering only the year, a sensible idea as it reduced the amount of change needed to the plate.

This chart shows the harbour and town of Albany on the south coast of Western Australia and the survey made by Matthew Flinders in 1802 of King George's Sound the principal body of water but also of Princess Royal Harbour and Oyster Harbour which are extensions to the main harbour. Flinders' track and soundings are retained. The additions mentioned in the title relate to the development of the settlement on the north shore of Princess Royal Harbour and there is a further large scale inset of the town and environs.

In state two of this chart scales have been added to the chart and inset and there is an imprint which reads 'London, Pubd. May 31st, by J. Arrowsmith, 33 East Street, Red Lion Square.' This chart is combined with the map Discoveries in Western Australia.

In the third state seen the title of the chart has been moved to the top left and there is an additional inset map of Peel Harbour by J.S. Roe dated 1838. The chart has been considerably amended with new information and is dated 'Jany. [space] 1840.' 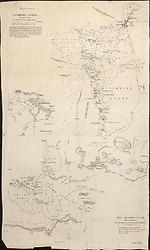 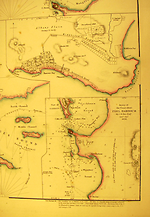