The third map Van Diemens Land at a scale of 1:633 360, shows the present State of Tasmania an island to the south of the mainland which was discovered and named by the Dutch in 1642. It was one of the earliest Australian plates to feature in Arrowsmith's first issue of his London Atlas and has been found in six states. In the very early issues of the Atlas it is shown as plate 36 and with the imprint '15th Feb 1832' and this first state also appeared in James Bischoff's Sketch of the History of Van Diemen's Land published in 1832 (Herbert, 1989). The author, James Bischoff, was listed as a business man of Tasmania and London. He became Chairman of the Van Diemen's Land Company in 1828 and Managing Director from 1832 until 1833.

At this stage Arrowsmith had only prepared two maps of Australian interest for his atlas. When however he decided to introduce a third map and placed it before the current plate 36 Van Diemens Land, the plate number for that had to be changed to '37'. The sources Arrowsmith gives for his map are the original manuscript surveys held in the Colonial Office and information from the Van Diemen's Land Company which occupied offices at 55 Broad Street, London. Although Arrowsmith reissued the map through until the year 1842 he made no change whatsoever to the information contained in the map itself. The various states identified therefore are a record only of reissues of the original map.

After this most inauspicious beginning; three plates on Australia, of which two were produced without sufficient thought being invested in their design limitations, Arrowsmith virtually started all over again with his treatment of the cartographic portrayal of the Australian continent. He produced a new title to replace Map of the discoveries in Australia, refashioned his Discoveries in Western Australia and all but abandoned his third map Van Diemens Land. He did reissue it with an updated imprint but added nothing to the information originally presented in 1832. It is suggested that he realized that others, such as the Surveyor General in Hobart, were in a position to produce better maps of Van Diemens Land than himself. 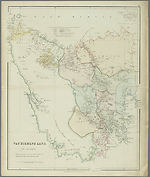 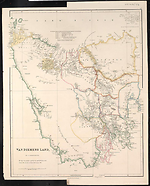 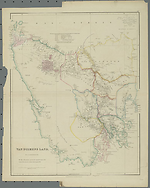 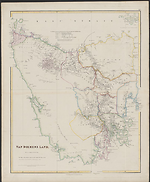