Map State South Australia shewing the division into counties of the settled portions of the Province, 1843/1

Shows the area south of 31°30'S and from the Eyre Peninsula eastwards to the Coorong. Relief shown by 'hairy caterpillar' hachuring. Nine counties are shown. 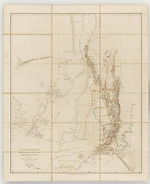