This chart is a later version of one published the previous year, i.e. 1840 with the title Australia from Swan River to Shark Bay embracing Australind with Port Grey from the surveys of Captn. Grey and other official documents / drawn by John Arrowsmith which see

The map has been found as an unnumbered plate [61] in a British Library copy of Arrowsmith's London Atlas (Preface 1847). In this atlas this plate precedes The maritime portion of South Australia

For this second state of Australia from Swan River to Shark Bay Arrowsmith has added, preceding the original title, a short comprehensive title embracing both map and chart.

The states of the map are basically the same with the removal in the second state of the word 'Australind' from the phrase 'Australind & Port Grey'. This was an error on Arrowsmith's part as the location of Australind is just north of the present day Bunbury.' This means that it does not appear on this map as it lies south of the present limits of this map. However in this second state much more nautical information is provided by the three insets. 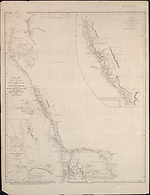 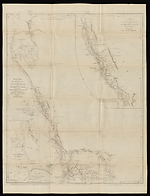 Title
Map and Chart of the West Coast of Australia from Swan River to Shark Bay
Type
Map
Repository
The University of Melbourne Library, Special Collections